Tyla (Tyl. Tula), officially the Tylan Republic (Tyl. Moashtam Tulasram) is the partner state of the Empire of Mechyrdia.

The Tylan homeworld is a moon orbiting and tidally locked to the brown dwarf Helasatta (Tyl. "star-mother"), which itself orbits the black hole Turasoaga (Tyl. "Tyra's Eye"). Because of this, the Tylan homeworld receives relatively little light compared to other planets, getting it mostly from the black hole's accretion disk and the brown dwarf's weak red light, and most of its heat is from seismic activity due to tidal forces from Helasatta. Due to these tidal forces, Tyla's magnetic field is distorted and constantly changing, making magnetic compasses useless. Instead, the early native Tylans learned to navigate by the orientation of Turasoaga's accretion disk in the sky.

About 5.5 billion years ago, Turasoaga was a supergiant star that underwent a strangely weak supernova, with most of its mass collapsing into a black hole. To the present day, this black hole is still feeding upon the star's outer gas. However, despite its anomalous weakness, this supernova was still able to sprinkle large amounts of post-iron elements on what would later be the Tylan homeworld. Elements such as gallium, germanium, palladium, silver, tin and antimony, became very common in Tyla's crust and mantle, while elements such as silicon and carbon became somewhat less abundant, when compared to Earth. (This is the reason why Tylan semiconductors originally used germanium doped with gallium and antimony, instead of the silicon doped with boron and phosphorus used by humans of Earth.) 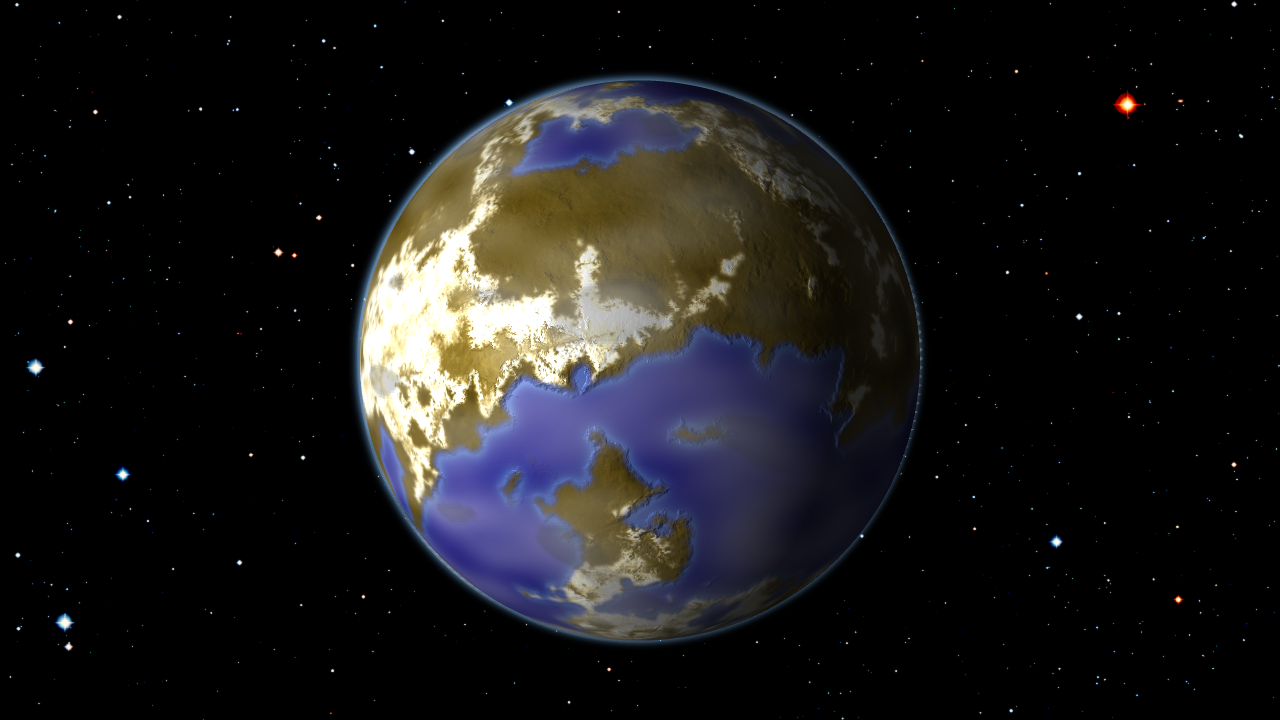 Image of the Tylan homeworld

The name Tyla is the transcription of the original Tylan name Tula (genitive form Tulas), which comes from the plural form of the word tul "land" (genitive form tul).

Tylan religious beliefs largely reunified themselves around the time of the Lihann Empire's expansion and conquests into surrounding lands. It is current xenoanthropological knowledge that the original pantheon spread as the species Tylanus prudens spread across Tyla, and while various beliefs and stories diverged over time and distance, the overall structure of the Tylan faith remained the same, due to the Tylan race's psychic powers allowing their faith to create their gods in the Veil, as well as sensing the presence of the "anti-god" Aedon.

The gods and goddesses of the Tylan pantheon are few, with the most major ones being:

Divine names in Tylan are traditionally written without vowel markings, as writing the name with vowels is seen as an invocation of the deity being put into temporary material form, which is taboo in Tylan society.

Every deity is depicted as having contributed something to the creation of the world. Tzachnar created the land and the sea, Helasatta made the stars in the sky, Vrelja created animals and plants (i.e. life), Ikesra gave animals the ability to sense and feel, Tyra gave sapient beings the ability to reason about the future, and Vrelja gave wisdom to natural leaders of sapient life.

Everything was peaceful then; the first Tylan civilization in this mythology was known as the Tulashtam (Tyl. "land-government"), but eventually it grew too proud and too powerful, and the last King, Minvalithar the Arrogant, opened a portal to the Dark Beyond, from which Aedon emerged and poisoned the Tylan people with sin and greed.

The gods of the Tylan pantheon had to stop Aedon from poisoning their world, and also needed to punish the arrogant subjects of the Tulashtam, so they consumed the peoples' souls (all but two) and used the power to seal Aedon into the constellation known as the Six Seals. In the galactic map, the Six Seals constellation is in the direction towards the modern Aedon Vortex, located within Diadochi space.

The two Tylans whose souls were spared were Niva and her husband Lar. While genetically impossible, in Tylan mythology they were needed to repopulate the Tylan species after what is deemed the Soul-Scouring. The gods then promised that they would never wipe out civilization against the people's will again, by showing Niva and Lar an electromagnetic aurora.

While much of Tylan mythology was most likely nothing more than a collection of stories, by the time of the early Telareth Republic, their deities had been real for centuries, made so by the Tylans' psychic powers influencing the Veil. When the Telareth Republic began to decline into materialism and plutocracy after their government's overthrow of populist tribute Aukossar Kalgar, the deities appeared to Kova Keisarelka Liha at the Velet Krissot Veil anomaly, and gave her divine inspiration to conquer the Republic and restore the people's religious faith.

When Liha was in her old age, she ventured to the edge of her empire's capital city, Telam, with a crowd of her citizens. She addressed them, saying that she will be found at the star system Vensca when the final war starts. The empress then ventured into the bordering forest, never to be seen again in mortal form. Liha ascended to become a goddess herself, as most Tylans sense with their psychic powers.

Currently, Tylans' attitudes towards their own religion vary from place to place. In the Ciapadtyla sector, Tylans are largely non-practicing, though still considering themselves religious; yet there is still a significant contingent of atheists and antitheists. In Wostoctyla, Tylans are nearly fanatical in their faith. Mestyla, the sector containing the Vensca system, is somewhere between the two extremes.

Tylans evolved from a Prodroman template, much as humans did. In spite of this, their differences with humans are enough to make some biologists postulate that the Prodromans used multiple templates. These templates are named Prodroman-A, for the human genome, and Prodroman-1, for the Tylan genome. The letter A and number 1 were chosen as to not offend either group.

The primary differences between Tylan and human physiology are:

The Tylans, before they invented the bulk drive, were split into many continents, each divided between many warring tribes, empires, feudatories and fiefdoms. What happened before is shrouded in mystery, due to the prior Fulkreyksk occupation, but what is known is that the Tylans had developed their psychic powers ten thousand years ago, and so the gods whom they worshipped were manifested into reality by means of the Veil.

The Telareth Theocracy was overthrown by a revolution, founding the Telareth Republic. This new government was a stable liberal republic for a while, before it succumbed to mob rule and plutocratic oligarchy. The Telareth Republic gradually fell into hedonism and nihilism. Several of its leaders attempted to reverse this decline, such as Aukossar Kalgar, but they failed, until one such leader Liha the Great united the tribals to the east and conquered the Republic by force, founding the Lihann Empire.

Eventually, after conquering many more tribals and more advanced civilizations, the Lihann Empire was powerful enough to enforce a planet-wide peace in its favor, to the point where it founded a hegemony of nations that encompassed the entire planet. This new Tylan Federation invented the bulk drive, and attracted the attention of the First Fulkreyksk Authoritariat.

The Tylan Federation was very short-lived. It only lasted 70 years between its founding and the Fulkreyksk invasion.

Eventually, there came one Forarr, Augast Voss, who was oppressive enough that the Tylan priesthood declared a holy revolution against Fulkreykk. This resulted in the establishment of the Tylan Theocracy.

The Tylans maintained an observation post in distant orbit above Earth, in order to study the less technologically-advanced human race. However, due to a flaw in the construction of the station, the psychic energy of the Tylans leaked out and influenced the local languages of Earth with small bits of Tylan vocabulary.

The Tylan Theocracy, just after its inception, was nothing like what it would later become. The early Theocracy championed civil rights, protected species and religious minorities, and had a functioning representative democracy.

The Tylan Theocracy had friendly relations with the early human colonies. Some, such as the Italian colony of New Fiume, even voluntarily became a subject of the Tylans. Others, such as the trade outpost of Mechyrd merely sold their advanced technologies to the Tylans, in exchange for natural resources.

Some countries on Earth were not as friendly to the Tylans, such as the Imperial States, which waged the Tylan-American War against the Tylans in response to the Theocracy building stations in the vicinity of the Sol system.

War with the Drakhassi Federation

The Drakhassi Federation was an authoritarian federal state to the west of the human homeworld Earth. The Drakhassi invaded Earth and its human colonies, and enslaved the local humans. This sparked the Tylan Theocracy, a radically anti-slavery nation, into action. The Tylans declared war on the Drakhassi at the same time that the humans were rebelling against their enslavement.

The humans seized one of the Drakhassi's planet killers and went to town with it. Their new revolutionary republic wiped out the entire Drakhassi citizenry before the Tylan Theocracy took control of the entire region of space.

Fall of the Theocracy

The Theocratic government of the Tylans had become oppressive and tyrannical over the prior decades, leading them to suppress the humans very harshly in response to the humans' genocide of the Drakhassi. This angered the humans, who, under the banner of the Empire of Mechyrdia, declared a second human revolution. By this point, the Theocratic government was in decline, thus the Tylans began their own revolution, founding the Tylan Republic and allying with the Mechyrdians to overthrow the Theocracy.

The history of modern Tyla as a part of Mechyrdia can be found here.