The Tylan Republic also has ships of its own navy: they use the same designs as Mechyrdian ships, albeit with blue trims instead of gold trims in order to distinguish between the two navies.

The Mechyrdian Navy has six departments: 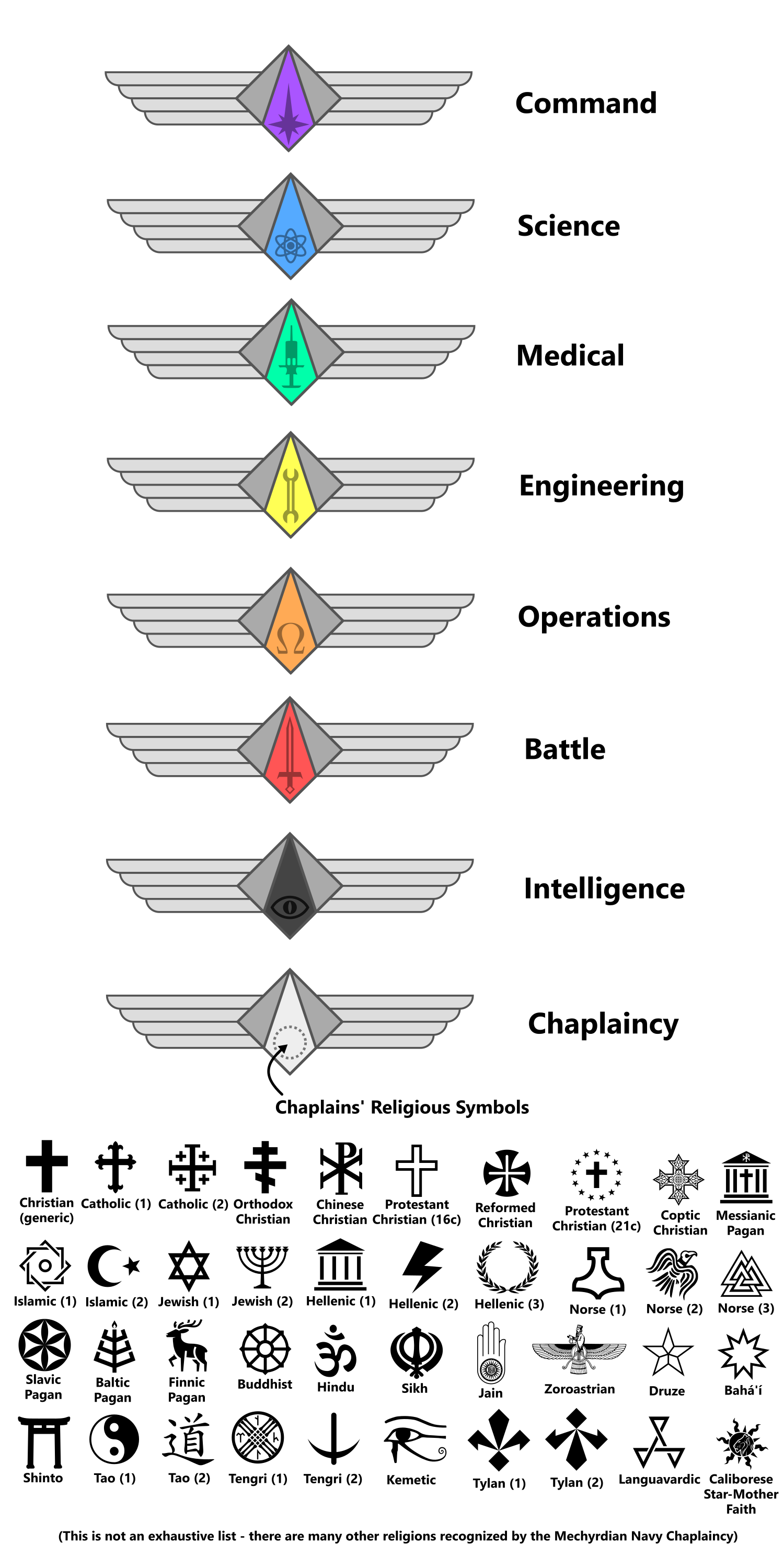 The flagship of the Mechyrdian Navy is the CMŠ Epicheirema (ACLX-48), a Languavarth-class battleship. The name is a Tylan spelling, using the Latin alphabet, of the Ancient Greek word ἐπιχείρημα, meaning "undertaking" or "military enterprise"; in the Tylan alphabet it's spelled 'epiCZrema. It is the second ship to bear the name Epicheirema, the first being a Vensca-class cruiser during the Arkant Horde's invasion of the Mechyrd system, from which Corporal Róman Gawrilówič Štertów launched his boarding action into the Khagan's flagship, resulting in the destruction of the Arkant ship and the end of the invasion.

In the 230s and 240s UC, during the Fulkreyksk Cold War, Mechyrdia made massive advances in military technology, such as self-replicating armor that regenerates even while in battle, and bulkspace hyper-antenna scanners that look into a three-dimensional universe from bulkspace similar to how a person would look at a two-dimensional drawing on a piece of paper. However, the implementation and testing of these technologies would last until the fall of Fulkreykk, meaning that the Mechyrdian Navy had no reason to deploy them in production, especially with the post-Fulkreykk Mechyrdian military budget cuts.

However, with the rising threat of the Diadochi, in particular the Diadochus Masra Draetsen, the products of Fulkreyksk Cold War-era research are finally being put to use, in both newly-built ships and refits of existing ships.

In 243 UC, veterans of the Mechyrdian Navy's boarding strike corps petitioned the Senate to give the planned ACLX-48 the name Epicheirema, in the 244 military budget. The petition succeeded, largely with the support of actor Gawril V Rómanówič Štertów, a distant descendant of the original Hero of the Empire, Corporal Róman Gawrilówič Štertów.

On Defense of the Empire Day (a Mechyrdian holiday celebrating the defeat of the Great Khagan at the First Battle of Mechyrd) of 244 UC, Minister of Defense Gaius Cornelius Merula publicly announced that the new flagship, the ACLX-48, would be named Epicheirema after Corporal Štertów's original strike-ship. The Corporal's descendant, Gawril V Rómanówič Štertów, was named the ship's sponsor.

On Octóber 23rd, 247 UC, the Mechyrdian Navy signed a Ŧ6.4 million contract with the Shipmen Syndicate to deploy the new technologies in constructing the battleship. Like most Mechyrdian ships, the battleship was constructed at the Seku-Dur shipbuilding facilities in orbit of Mechyrd, which employs over 120,000 workers.

Construction of the CMŠ Epicheirema took over five years, citing complications related to the exotic particle reactor. There were several accidents that led to containment breaches, resulting in a total of 62 injured, yet no one was killed. Several Navy engineers put forth the idea to use a normal deuterium-tritium fusion reactor, which the Navy administration deliberated over, before coming to the conclusion that even fusion reactors wouldn't be sufficient for the high power requirements of the new technologies within the ship; furthermore, the Navy was unwilling to procrastinate on field-testing exotic particle generation, since they would need to learn how to build exotic reactors safely at some point.

The budget allocated to build the new battleship was overestimated, and the Mechyrdian Navy had Ŧ30 thousand left over. Navy administration decided to use it as extra payment for the Shipmen who built it, which would end up going to the workers, in the ideal case, due to the collective ownership of the Shipmen Syndicate.

Epicheirema was officially commissioned by the Navy on 21st Giuli, 254. Tiberius von Kirche was chosen to be the ship's captain.